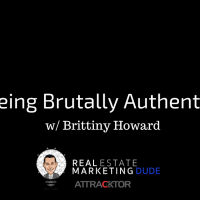 Brittiny Howard is a Boss, plain and simple, closing on her first home within six weeks of getting her real estate license. The average agent does six sides per year, but in her first full year, Brittiny closed on an unbelievable 52 sides. What’s her secret? For Brittiny, there is no such thing as a cold lead. She approaches each and every potential client with honesty, humanity, and a sense of brutal authenticity— even going so far as to build ‘Brittiny’ into her automation systems.

Brittiny is the geaux-to agent with The Brittiny Howard Group in Baton Rouge, Louisiana. She has prospered with a ‘serve first’ philosophy, doing $10M worth of business in her rookie year. Brittiny is also a coach for Club Wealth, a platform that offers events, strategy sessions, and one-on-one coaching for real estate professionals.

Today, Brittiny joins me to explain how her background as an entrepreneur influenced her early success in real estate. She speaks to the flooding that devastated her community in August of 2016, describing how the natural disaster affected her business and personal life—and why she felt a calling to volunteer in the aftermath of Hurricane Harvey the following year. Listen in for Brittiny’s insight on taking a warm approach to cold leads and learn how she makes AI sexy by bringing authenticity to automation!