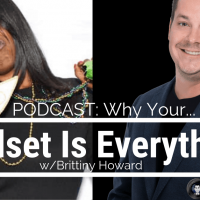 What kind of mindset do you need to do 52 sides in your first full year as an agent? To come back after a flood takes out 75% of your market? To lose 95 pounds? Any one of these accomplishments would be impressive on its own, but Brittiny Howard has achieved all three because she approaches each day with a positive attitude, asking herself, ‘What can I do right now, this minute, to reach my next goal?’

Brittiny is the top-producing agent behind The Brittiny Howard Group, an award-winning team out of Baton Rouge, Louisiana. Today, she joins me to explain why mindset is everything when it comes to overcoming adversity and reaching your goals. She discusses how being the #1 emulator helped her break into the top 1% and describes why being naïve is preferable to ‘paralysis by analysis.’

Brittiny also addresses her comeback after the August 2016 flood wiped out 75% of her market and shares her secret to converting 8% of cold leads as a solo agent. Listen in for Brittiny’s mindset advice around breaking big goals into small chunks, putting what you want out into the universe, and connecting your goals to doing something good for others.

Profit First: Transform Your Business from a Cash-Eating Monster to a Money-Making Machine by Mike Michalowicz